Lily and the Octopus by Steven Rowley 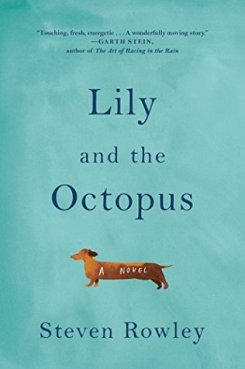 Ted Flask is a 42 year old man living in Los Angeles, CA. He has recently ended a serious relationship with Jeffrey and he sees a shrink on a regular basis. The one great thing in Ted’s life that he can count on is Lily.

When Ted was in his twenties, his best friend Trent predicted that his life would change forever when he turned 29. Sure enough, one beautiful spring day, the last day of his 20s, he held Lily in his arms. When he adopted Lily and brought her home, she immediately exclaimed THIS! IS! MY! HOME! NOW! And indeed Lily had found her forever home. Ted would be responsible for her daily life and well-being from then on.

That was 12 years ago. Ted and Lily have a routine these days. They are always there for one another. He can confide in her, he can share a pizza with her, he can play games with her, he can watch football with her and he can talk about cute guys with her. Lily is the epitome of selfless love, patience, kindness, strength. She is all of the things that Ted needs in his life. Lily is 12 years old. Lily weighs 17 pounds. Lily is a dachshund.

Now Ted has discovered that Lily has an octopus. All of a sudden it’s just there, sitting on her head for the world to see. Ted is outraged, fuming! IT CAN’T HAVE HER! Ted doesn’t know what to do. He frets, he ponders and in the end he decides to take himself and Lily off on a bizarre adventure to the sea, in hopes of ousting the octopus from their lives.

You may or may not have realized it but Lily’s “octopus” is a metaphor for a tumor.

The moment I began reading Lily and the Octopus, I knew it would be both one of the most heart-warming and one of the most heart-wrenching books I’ve ever read. If you are an animal lover, I think you will feel the same. Well-written dog books are the ones that talk of happy times, funny times, sad times and everything in between; the things that form the bond between man and man’s best friend. These books usually always feature a sad note because unfortunately, our best friend just doesn’t live as long as we do. Yet somehow they also tend to leave us with something upbeat at the end

I knew I wanted to read this book but I wasn’t so sure of the timing. I had to get it read because it was being published soon, and I like to get my reviews done around that time. But, I wasn’t sure it was such a great idea because I was going into Memorial Day weekend. Eight years ago on Memorial Day, I lost the sunshine of my life, my boxer, Ginger. She had a heart seizure and died at home in my arms. Of course, she’s ALWAYS on my mind. Not a day goes by that I don’t think about her, but Memorial Day is an especially tough time for me as I relive that night over and over again. The average life span of a boxer is 10 – 12 years and I’ve known of quite a few owners who lost their boxers to cancer much earlier than that. Ginger lived to be 12 years old so I count myself among the lucky. But life will never be the same without her sweet and gentle soul by my side.

This book has some excruciatingly funny moments. It also has some very tough moments. Is it worth the read? Absolutely! I wholeheartedly recommend it! Steven Rowley has created a work of fiction around the wonderful and tearful times he shared with his own dog, Lily. He writes of Ted and Lily’s relationship with heart, humor and, I’m sure, lots of his own tears. He shares all of the cute, silly and distressing memories of his time with Lily. In the afterword, he expresses his wish to share these feelings with others in order to give them permission to grieve for their pets too; because the love you share is part of the legacy of kindness that will always carry forward.

I want to thank the publisher (Simon & Schuster) for providing me with the ARC through NetGalley for an honest review.

9 thoughts on “Lily and the Octopus by Steven Rowley”