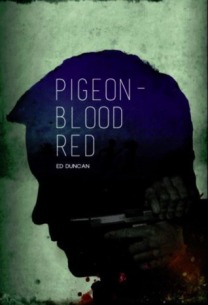 “Pigeon-Blood Red” is a phrase coined by the gem dealers of India many centuries ago.  It’s the most desirable color a ruby can have.  Legend says that the first two drops of blood that come from a freshly killed pigeon are this same rich red color.  In the case of this book, it refers to a necklace with 16 perfectly matched pigeon-blood red rubies.

We are introduced to partners in crime, Rico and Jerry as they begin searching their car for this priceless ruby necklace that was entrusted to them by their boss, Frank Litvak.  Frank is a Chicago loan shark, an aging ex-street fighter nearing 50.  He has a very intimidating presence and demands absolute loyalty and obedience. Rico and Jerry are two of his enforcers.

Rico is handsome in a foreboding way with an air of danger that attracts women.  Big and solidly built, he is also a distant, brooding, brutally honest character who is loyal to a fault and as deadly as they come.  If you want someone to have your back in a fight, he’s the one you’d pick.  If you need sympathy and a shoulder to cry on, forget it!  Rico has one true belief, “anybody can cross the line.” Rico may be the only person that doesn’t always do things Frank’s way, but since Frank put the necklace into Rico’s hands he knows that Rico won’t rest until he gets it back.  It’s a matter of professional pride to him.

Rico’s partner Jerry is shorter and more slender.  Things don’t come naturally to him the way that they do to Rico.  Jerry is always overcompensating and trying to impress somebody.  He’s never been a big guy and he’s never really excelled in his endeavors.  He mostly plays sidekick while Rico does most of the planning and execution.

When they don’t find the necklace in their car, Rico and Jerry backtrack and come to the conclusion that Robert McDuffie must have stolen the necklace from them.  Robert is a proud member of the black upper middle class.  He owns several stores but he expanded too rapidly.  He’s also an uncontrollable gambler.  He’s now into Frank for $50,000.00 and counting.  Rico and Jerry picked him up for a conversation with Frank but when they were driving him home, Robert discovered the necklace and decided to pocket it.

Rico pursues Robert from Chicago to Hawaii, where Robert gives the necklace to his wife.  The chase goes awry when Rico kills Robert and another woman, only to find out that the woman he killed wasn’t Robert’s wife.  Following the trail of the Robert’s wife and the necklace, Rico finds that his mind has wandered from the task at hand.  He dreams of taking his girlfriend to Hawaii and living a new life.  Although he continues his efforts to get the necklace back, he faces some life-altering decisions, for himself and those he pursues.

The author gives us great, in-depth character outlines and an interesting story that kept me reading to the end.  I did think it was strange when the story was being told from one character’s POV and in the next sentence or paragraph, it would shift to another character in that scene’s POV.  This happened several times.  It’s not that I had a hard time following it and there’s nothing wrong with that.  It was only strange to me because it’s not something I usually come across in books.  This method made it seem as if I was reading a screenplay.  The book is less than 200 pages and a very quick read.  After having invested the reader in a couple relationships, I felt the end wrapped them up rather abruptly but in the author profile it says that this is the first of a trilogy so there will be more to come.

I want to thank the publisher (Zharmae) for providing me with the ARC through NetGalley for an honest review.