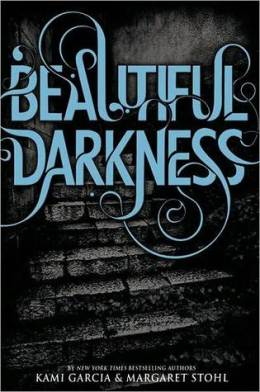 Beautiful Darkness is book two in The Caster Chronicles and it picks up right where the first book left off.

Ethan Wate has always wanted to graduate and escape the smalltown mentality of the of Gatlin.  And then he met Lena Duchannes and she changed it all.  He is at once taken with her mysterious ways and drawn into her family secrets.

Lena is part of a cursed family of supernaturals that have been in Gatlin for centuries. On Lena’s 16th birthday, she waited to be Claimed by her family’s curse, but the curse just keeps getting more demanding.  After the loss of one of her own, Lena withdraws from Ethan.  Not only has Lena deserted Ethan, but he and his family are still struggling through the loss of his mother.  A dejected Ethan refuses to give up.  As Lena leaves town to seek her future, Ethan tries to uncover more secrets from Gatlin’s past.

I really enjoyed it.  The end of the first book was action packed and the end of this one was as well.  A couple of new characters were introduced and all of the major characters from book one were here too.  My favorite character is Link, who adds some much-needed humor to the series as it can get rather dark.  We are left with more than a few surprises that I didn’t see coming 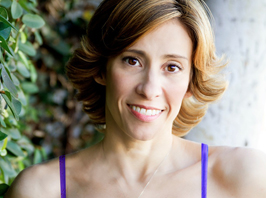 BEAUTIFUL CREATURES has been published in 50 countries and translated in 39 languages. The Beautiful Creatures movie based on the novel, released in theaters on February 14, 2013, from Warner Brothers, directed by Richard LaGravenese and starring: Viola Davis, Jeremy Irons, Emma Thompson, Emmy Rossum, Alice Englert, and Alden Ehrenrich.

Kami was a 2012 recipient of the Bold Ink Award, and her short story “Red Run” was featured in The Guardian, after it was selected for the UK’s National Short Story Month in 2012. She is a member of PEN West, Science Fiction and Fantasy Writers of America, the Horror Writers Association, and works with WriteGirl, a creative writing and mentoring non-profit organization for girls. Kami has participated in the LA Times Festival of Books, Texas Book Festival, the Paris Book Fair, Roma Cinemafest in Rome, ALA’s Annual Conference, Decatur Book Festival, Austin Teen Book Festival, Southern Book Festival, and Comic-Con International. Kami was a founding member of the Young Adult Capitol Bookfest in Charleston, SC, and continues as a Director of Programming for the festival. She was also a founding member of the Smart Chicks Tour.

Kami grew up outside of Washington DC, wore lots of black, and spent hours writing poetry in spiral notebooks. As a girl with Southern roots, she has always been fascinated by the paranormal and believes in lots of things “normal” people don’t. She’s very superstitious and would never sleep in a room with the number “13? on the door. When she is not writing, Kami can usually be found watching disaster movies, listening to Soundgarden, or drinking Diet Coke.

With an MA in education, Kami taught in the Washington DC area until she moved to Los Angeles, where she was a teacher & Reading Specialist for 14 years. In addition to teaching, Kami was a professional artist and led fantasy book groups for children and teens. She lives in Los Angeles with her husband, son, daughter, and their dogs Spike and Oz (named after characters from Buffy the Vampire Slayer)

Margaret Stohl is the author of Icons, the first book in the Icons series, forthcoming from Little, Brown in spring 2013, as well as the coauthor of the New York Times,USA Today, Publishers Weekly, Los Angeles Times, IndieBound, and internationally bestselling Beautiful Creatures Novels (with Kami Garcia.)

Margaret is a veteran of the video-game industry, and after working with Activision (now Activision Blizzard) and Westwood Studios (now Electronic Arts), Margaret became a cofounder of 7 Studios with her husband, Lewis Peterson. She has previously been nominated for Most Innovative Game Design at the Game Developers Conference.

A graduate of Amherst College, where she won the Knox Prize for English Literature, Margaret earned a master’s degree in English from Stanford University and completed coursework for a doctorate in American Studies at Yale University. Margaret was a teaching assistant in Romantic Poetry at Stanford and in Film Studies at Yale. She attended the Creative Writing program of the University of East Anglia, where she was mentored by the Scottish poet George MacBeth.

Margaret loves traveling the world with her daughters, who are épée fencers, and living in Santa Monica, California, with her husband and two bad beagles.